“In a democracy, information is a vital, fundamental public resource. As people change how they access and use information, we must change how we provide it.”
Congresswoman Jane Harman, President and CEO, Woodrow Wilson International Center for Scholars
CDI's "Beyond the PDF: Think Tanks in a New Digital Age" // February 15, 2012

The Center for Digital Information (CDI) was established in 2010 as a nonprofit, nonpartisan initiative to help policy research organizations, foundations, and academic research institutes more effectively inform our public policy dialogue in a rapidly evolving digital age. CDI has observed that while the capabilities of digital media — and their uptake by citizens and policymakers — have progressed quickly, the social sector's methods of commissioning, producing and communicating information have not. The most visible symptom: 98% or more of the sector's output remains traditional reports, white papers, policy briefs, books and journal articles. CDI's strategy is to promote rethinking this outdated product line and increase the use of the emerging interactive capabilities of modern digital technology. By going "beyond the PDF document," CDI will ensure that as the digital age progresses, the social sector remains an effective source of information on vital public issues.

This mission was first introduced to foundation representatives and other stakeholders in late 2010 at a roundtable in Washington, DC. Following that meeting, CDI established an affiliation with the Annenberg School for Communication at the University of Pennsylvania and created a presence in Washington. In September 2011, CDI began a 12-month pilot phase supported by the Robert Wood Johnson Foundation.

While CDI has successfully executed its own work, others in policy and philanthropy have begun to take note of the importance and timelieness of CDI's mission. CDI has published commentaries for the Stanford Social Innovation Review (SSIR) and the Nonproft Technology Network (NTEN). It has successfully engaged key partners for events and projects, including the Wilson International Center for Scholars, the Annenberg School for Communication & Journalism at USC, the Communications Network, Nielsen and others. CDI has continued to expand its advisory board with leaders in communication scholarship, technology and civil society. CDI director Jeff Stanger has been invited to speak at a number of important gatherings across the country. In September 2011, he facilitated a session at the Communications Network annual conference on adapting foundations' communication practices for the digital age. In October, Stanger addressed the Illinois Institute of Technology's Design Research Conference on the digital presentation of research findings. In May, he appeared with leading digital thinkers — Pew Internet project's Lee Rainie, Harvard's David Weinberger and Edelman's Steve Rubel — on a panel at the International Food Industry Council communications summit. In June, Stanger spoke at an event on government reporting in the digital age organized by the United States GAO. Stanger is scheduled to appear with Google chief economist Hal Varian to discuss data visualization at the Association for Public Policy Analysis and Management (APPAM) fall research conference in November.

In the past year, CDI has successfully established itself by articulating a critical challenge facing the social sector — the need to use digital media more effectively to inform the public policy dialogue. CDI has struck a chord with policy researchers and philanthropists, who have shown a strong desire for an organization like CDI to take the lead in convening stakeholders and modeling new digital-age practices. This pilot phase has provided a strong foundation for future work. 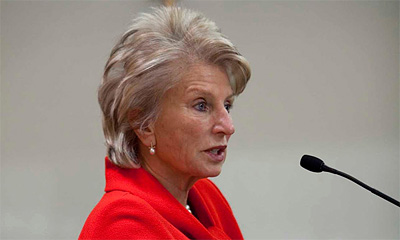 “Beyond the PDF: Think Tanks in a New Digital Age”

The Center for Digital Information convened high-level representatives of more than 45 of the nation's leading policy research organizations, foundations, government agencies and the White House at "Beyond the PDF" in Washington, DC. The roundtable discussion focused on how the field is adapting its information production and dissemination practices to keep pace with a rapidly evolving digital environment. The event was developed in partnership with The Woodrow Wilson International Center for Scholars and supported by the Robert Wood Johnson Foundation. It featured introductions by Wilson Center CEO and former U.S. Representative Jane Harman and CDI director Jeff Stanger; digital case studies from the World Bank, Pew Research Center, Kaiser Family Foundation, New America Foundation and the Wilson Center; and a lively discussion among the 65+ attendees at the Ronald Reagan Building and International Trade Center. Among the senior leaders who participated were the Chief Operating Officer of the Peterson Institute for International Economics, Senior Fellow at the Aspen Institute, Deputy Director of the Council on Foreign Relations, Vice President of Communications and Strategy at the Carnegie Endowment for International Peace, Senior Vice President for External Affairs at the Center for Strategic and International Studies, Senior Policy Analyst at the White House Office of Science and Technology Policy, as well as senior communications staffers from other leading think tanks. 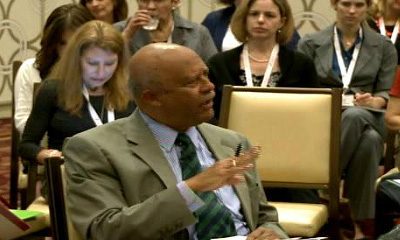 “Philanthropy and the Digital Public Dialogue: Challenges and New Opportunities”

An event recap and archived video are available at digitalinfo.org/cof

Modeling “Beyond the PDF”

Hands-on work with Robert Wood Johnson Foundation research grantees was a central piece of CDI's pilot year. CDI has been engaged with the Harvard School of Public Health and the Bridging the Gap Research project based at the University of Michigan and University of Illinois, Chicago. These projects — of varying style and complexity — were designed to demonstrate how foundations and researchers can integrate modern digital production techniques into their research reporting. 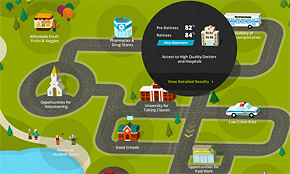 The tablet computer is on pace to become the most quickly adopted non-phone technology in history — 21% of U.S. adults already own a tablet. It is important for foundations and social sector organizations to begin designing information for this new platform. CDI worked with the Harvard School of Public Health (HSPH) and the Robert Wood Johnson Foundation to create "Healthy Communities for Retirement," a tablet-optimized digital experience based on a battery of fifteen questions in a September 2011 national survey of pre-retirees and retirees. The application allows a user to browse survey results in an illustrated "community" by tapping, swiping and scrolling. The tool is built in HTML5, so is also accessible on the web in a standard desktop browser.

See healthycommunities.digitalinfo.org
(view on the iPad or modern desktop browser) 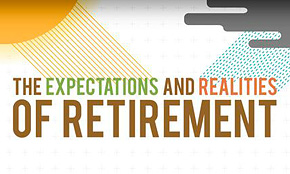 "Expectations vs. Reality" uses a series of questions from the "Retirement and Health" Harvard School of Public Health survey of Americans over 50. The survey found significant differences between pre-retirees' expectations and retirees' real-life experiences in the areas of health, relationships, quality of life and physical activity. The comparison of these two groups was used as the framing mechanism for an interactive web tool. Users can browse all of the questions HSPH asked, viewing the responses of pre-retirees and retirees side-by-side. For context, CDI developed an animated video to highlight key findings, narrated by HSPH researcher Dr. Gillian SteelFisher. 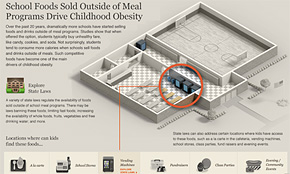 CDI is working with the Bridging the Gap research project on a digital tool related to foods sold outside of school meal programs, a driver of childhood obesity. The project has two objectives: explain the topic to those unfamiliar with it and allow exploration of Bridging the Gap's rich body of data on state policies related to these foods — five years of data; 99 facets of policy; 50 states and DC; elementary, middle and high school. CDI's approach has been to "cover" the topic much like a digital journalist might. CDI is developing a full-featured information application, combining interactive illustration and information graphics, iconography, maps, animated charting, and timelines. This project is awaiting final content from the research team. 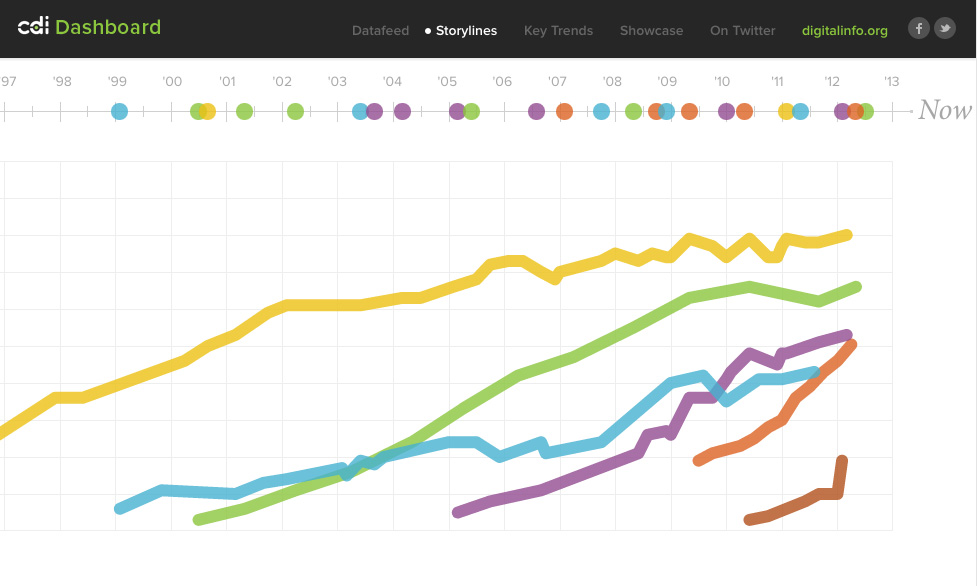 View the Dashboard at dashboard.digitalinfo.org

The CDI Dashboard aggregates key data trends shaping the digital landscape, drawing on reliable sources such as the Pew Research Center and Nielsen to chart the unfolding story of how people's behaviors and technological change are altering the public dialogue. It provides a one-stop shop for indicators that are useful to policy researchers, foundation program officers and communications strategists. 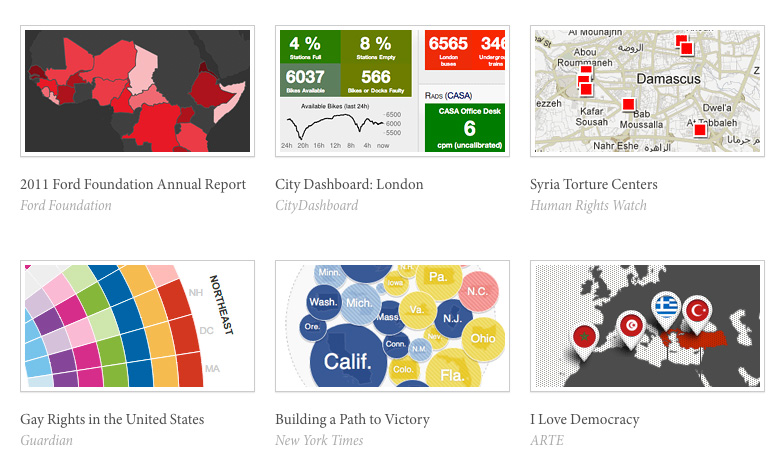 View the Showcase at digitalinfo.org/showcase

The Showcase feature of the Dashboard is a collection of examples of innovative digital projects from various fields. The Showcase has been widely regarded as a useful resource for organizations seeking to expand their work into interactive information graphics, data visualizations, database tools and mapping applications.

In addition to the deliverables on its grant from RWJF, CDI has been actively engaged in outreach to raise the profile of the initiative, establish partnerships with other organizations, and introduce the Center to a network of potential funders.

"Data are Not Information"
by Jeff Stanger
NTEN

The Center is pursuing possible collaborations with Living Cities, the Tow Center for Digital Journalism, the MIT Center for Civic Media and others. These are at various stages of discussion, from preliminary to advancing.

Conversations with other foundation partners began in earnest following CDI's successful event at the Council on Foundations annual conference on April 30, 2012. Since that time, the following foundations have been introduced to CDI: Robert Wood Johnson, Ford, Hewlett, Case, California HealthCare, Mott, Knight, Atlantic Philanthropies, Gates, Packard and Patterson. CDI is in the process of contacting MacArthur, Casey, the California Endowment and Irvine. These conversations are too early in the process to have yielded firm funding commitments.